McMullen House Bed & Breakfast offers a unique and personal Pennsylvania Oil Region experience providing a “Celebration of Hospitality, History, and Science in the ‘Valley that Changed the World.'”  The property is non-smoking and pet-free throughout.  Each themed room (Drake, Tarbell, and Lake Erie Cottage) has a private bath and free Wi-Fi.  In the morning, guests enjoy a French-inspired breakfast before heading out on the trail or going out in town.

McKinney Hall, a part of the University of Pittsburgh-Titusville and built by Celia’s son-in-law, John Bryan is located across the street.  The Queen City Bike Trail that is part of the larger Erie-to-Pittsburgh Bike Trail is located about three blocks away.  Within two miles is the Drake Well Museum and Oil Creek State Park.

History of the House

McMullen House is a stately Italianate Villa built for Celia McMullen in 1870.  Celia, along with her husband and son-in-law owned the Titusville Iron Works.  The son-in-law, John Bryan, built a home across Brown Street, which is now McKinney Hall of the University of Pittsburgh at Titusville.  In 1862, Celia’s husband died and in 1871, John Bryan died.  Bryan’s passing left Celia as the only owner of the Ironworks, thus becoming the first businesswoman of Titusville.  Celia died in 1885.  Other famous people to own the house include John Stephenson, the editor of the Titusville Herald in the mid-1900s.

History of the Bed & Breakfast

McMullen House was briefly operated as a boarding house by Celia McMullen before her death.  In the 1980s the house was opened as a Bed & Breakfast and has continuously operated with the exception of a brief period in the late 1990s and early 2000s.  The house reflects the elegance of the “Oil Boom” period through architecture, Victorian furnishings, and a gracious lifestyle. 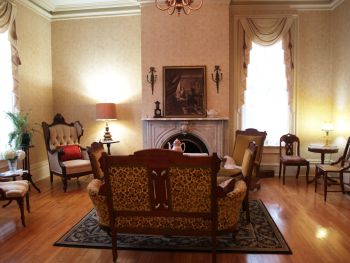 The parlor contains an Eastlake Suite that is original to the house facing a period fireplace. More period furniture owned by the Coxe family surrounds the suite. 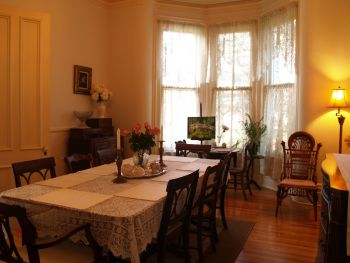 The Dining Room has a table that seats eight people and two other tables for more private dining. In the morning, a French-inspired breakfast is served here.

The library contains historical books, a reading area, and a TV for guest use.