McMullen House is a stately Italianate Villa built for Celia McMullen in 1870.  Celia, along with her husband and son-in-law, owned the Titusville Iron Works.  The son-in-law, John Bryan built a house across Brown Street, which is now McKinney Hall of the University of Pittsburgh at Titusville.  In 1862, Celia’s husband died and in 1871, John Bryan died.  Bryan’s passing left Celia the sole owner of the Ironworks, thus becoming the first businesswoman of Titusville, until her death in 1885.  The editor of the Titusville Herald, John Stephenson, lived in the house in the mid-1900s.

McMullen House opened as a bed and breakfast in the 1980s and continued except for a period in the late 1990s and early 2000s.  In 2012 the Coxe family acquired the house and re-opened the bed and breakfast with the name honoring Celia.  The house reflects the elegance of the “oil boom” period through Victorian furnishings and gracious lifestyle.

Dining Room: has a table seating eight people and two other tables for more private dining.  In the morning, a French-inspired breakfast is served here. 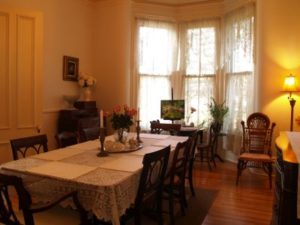 Library: contains historical books, reading area, and a TV for guest use.